1. The texts sent to melancholy, for possible publication, must be original and referred to the field of study. They conform strictly to the requirements contained in the publication rules and standards of quality and scientific rigor intended by this journal. These are the required criteria in the acceptance and evaluation of the proposed work.

Articles must be sent in Microsoft Word, OpenOffice or RTF format and can be sent by email to melancolia@revistamelancolia.com. The Secretariat of the journal will confirm via email the reception of the original and the beginning of the process of evaluation of the submitted work.

2. The works will have a maximum length of:

By these maximum lengths, we consider body of the text, footnotes page, pictures, maps, graphs, appendices of texts and bibliographies. Illustrations, pictures, maps or graphics should appear properly referenced and explained in the text: graduates, sequentially numbered, and accompanied by their respective feet image and source (s). It is located in the form after the referred paragraph. Images will be delivered in digital format (JPG or TIFF 300 and 240 DPI). It is the authors’ responsibility to get and give the journal the authorization to publish the images that require it.

3. The originals submitted to the journal should contain a first Deputy folio that includes: title of the work (in the language of publication and English); the date of referral of the article; Summary of the work, in your language and one in English (not more than 10 lines each). Next to them, they shall incorporate keywords (3 maximum), in both languages. The author's name should not be incorporated into this text.

4. In separate file it must be included the author's name; academic degree;  contact details; institution's membership and a brief personal curriculum (15 lines).

5. The journal publishes, preferably, works in Spanish and Portuguese, but we accept English, French and Italian as well.

6. Upon receipt of the original, it will be reviewed within a maximum period of 15 days if the submitted text respects the rules of publication above. In case of detecting any inconsistence in these formalities, it will be communicated to the author notification to adapt them to the journal’s requirements. Afterwards, it will be sent to scientific evaluation by peer review, in charge of renowned experts in the field.

7. The result of the evaluator’s report considers three possibilities: "accepted", "accepted with modifications" or "rejected". In the second case, it will be communicated to the authors the suggested changes so the original can be published. If it were rejected, it shall be notified to authors the reasons argued by the evaluators to reach such a decision. The main criteria for such an assessment will be: selected sources and the methodology used, the relevance and up-to-date  bibliography, compliance with the standards of edition, writing in the language of publication, the structure and originality of the work, the conclusions and the general scientific interest of the work, as well as their most significant contributions.

Melancholy is committed to starting and finishing the evaluation process within a period no longer than six months, informing the author of the result. After this evaluation is done, the editorial process will take fifteen working days, time in which the author must carry out corrections and appropriate amendments, and sent the text to the Secretariat of the journal, which will verify that the required changes have been made prior to publication.

If the original is accepted, it will be informed to its author, who shall communicate the conformity or rejection within a maximum period of seven days.

8. During the editorial process, changes are not accepted or additions to the text. Authors must correct the first drafts within a maximum of fifteen days from the delivery, otherwise it means that they accept the corrections made by the Editorial Comittee. The second test will be in charge of the editorial board.

9. Texts should conform to the APA (American Psychological Association) citation format, seventh edition 2019, whose Manual is available at: https://apastyle.apa.org/style-grammar-guidelines/paper-format/.

(b) At the end of the text there should be a section entitled “References”, Times New Roman font size 12, one and a half line spacing, French indentation of 1 cm, in which the bibliography and hemerography used by the author for the preparation of the article should be ordered alphabetically. Texts should be cited in the following way: author's last name (in capital letters) and initial letter of the author’s name, role in the publication in case there is more than one (coord.; ed.; trad.). The year of publication of the book should be placed in parentheses. Full title of the work in italics. Publisher [in the latest edition of APA it is no longer necessary to refer to the place, city or country where the work was published].

WHITE, M. (2020). The Eloquent Blood: The Goddess Babalon and the Construction of Femininities in Western Esotericism. Oxford University Press.

(c) Quotations of 40 words or less should be placed in quotation marks. Omitted words or phrases shall be replaced by ellipsis in square brackets [...].

(d) At the end of the quotation, the following should be included in parentheses: author’s last name, year of publication, page. For example: “The history of human thought emerged as a topic of intellectual fascination among Italian humanists in the fifteenth century, and the historiography of what we now call Western esotericism was born along with it” (Hanegraaff, 2012, p. 5).

(e) Quotations longer than 40 words must be separated from the text, indented 1 cm from the left margin and in Times New Roman 11 font, single spaced and without quotation marks.

Early modern occult philosophy involved two parallel modes of theorization: the hermeneutic and the causal. In the first, nature and the heavens were strewn with signs that could be interpreted by the skilled astrologer or magician. The hermeneutic argument stemmed from the belief that natural operations could be known through understanding the interconnection of signs or what Michel Foucault explains as the exposition of “the semiology of signatures” (p. 3).

(f) A footnote can be used to clarify or deepen the arguments in the body of the text. If you refer to an author or work, citation shall conform to the standards in this section. Footnotes should be used to quote in different languages than the article. Ex.: Quotations in latin, Greek, or quotations in French in an article written in Portuguese. The main text should be written in only one language.

(g) the texts shall not include information in small caps.

(h) subtitles must be placed in left margin, highlighted in bold and written in lower case.

(i) each paragraph should start with an indent of one centimeter.

(j) references to documents and manuscripts will have the following form: type of document or manuscript (letter, inquiry, relationship, self, Decree...), authorship or production entity, and recipient (if recorded), data (place, day, month and year); and then the current location in the archive or library where you can access this documentation: full name of the file or library (by adding their initials in capital letters in the first reference), collection, unit in the corresponding language (file/leg.,) (manuscript/ms., box/caj., folder/carp., record/exp...), and foliation/paging (if necessary and with the formula fol. / fols. or p. / pp.)

If a document has already been mentioned, it will be referenced abbreviated using the acronym of file or library included in the note where it was first mentioned.

(k) Bibliographic references to parts of books, i.e., chapters or sections of a work, should be included in the “References” as follows: author’s last name in capital letters and initial of the author’s name(s). Title of the chapter of the book without quotation marks and in rounds. Last name in capital letters plus initial of the name of the person in charge of the publication, role played (coord.; ed.), title of the book in italics, (pages in parentheses). Publisher.

(l) Bibliographic references to journal articles shall be in the following form: Author’s surname in capital letters, first initial. (The year of publication in parentheses). Title of the paper in round and without quotation marks. Name of the journal in italics, journal number in italics, and pages.

(n) Unpublished theses will be cited as follows: Last name(s) in capital letters and first initial. Year of defense in parentheses. Title of the thesis in italics. [Type of thesis presented (undergraduate/Master's/Doctorate) in square brackets.] Name of the Institution. Place. If available for consultation add the URL or the name of the Repository.

HASLER, J. F. W. (2011). Towards Hermeticist Grammars of Music: A Proposal for Systems of Composition Based on the Principles of the Hermetic Tradition, with Musical Demonstrations. [Tesis de Doctorado en Philosophy in Music (PhD in Music), University of Newcastle upon Tyne]. https://theses.ncl.ac.uk/jspui/handle/10443/1318

(o) Interviews that can be retrieved from a public media shall be cited indicating: Interview with Last Name(s), First Name. (Complete date). Title of the interview. Publication medium, City.

Interviews conducted by the author of the text are treated as “personal communications” and can be included in the body of the text with the information of date and place (Personal interview to J. P. Bubello, September 28, 2020, Buenos Aires), but it is not necessary to include them in “References” because the reader will not be able to retrieve the information.

(p) Proceedings of congresses or other scientific meetings should be cited in the “References” using the following format: SURNAME(S) of the author in capital letters and initial of the first name. (Year, month and/or day in which the work was presented in parentheses. Title of the contribution in italics. SURNAME(S) in capital letters and initial of the name of the person in charge of the congress/symposium/workshop. Title of the congress in italics. Place. If the video of the conference presentation is available, include a link at the end of the reference.

(q) tables or figures taken from a text and reproduced, or adapted, must include a footnote that entitles, expand or explain the content and also to indicate the source.

If the table or figure was taken from another work, include the footnote with the complete reference of the source according to the following format (this information is not included in the referenced works):

Of [or the data in the column are of] Article title, by A. A. Autor and B. B. author, year, title of publication, volume, p. xx. Copyright [year] by the name of the copyright holder. Reproduced [or adapted] with permission.

(r) If you are working with audiovisual media, in the “References” the material used must be cited as follows.

Films: last name in capital letters and initial of the name of the director and producer, year in which the film appeared, title of the film in italics, country of origin, name of the studio in which it was filmed.

Names and email adresses in this journal will be exclusively used for stated purposes and will not be proportioned to others with different ends.

Melandolia is not responsible for opinions about published articles

Translation or reproduction rights are reserved. 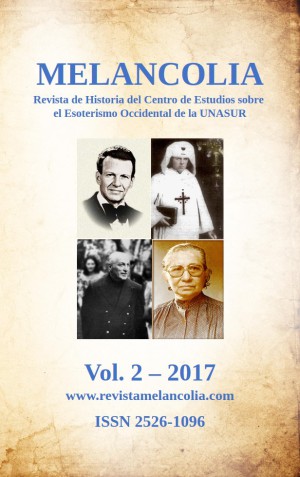 Melancolia was created in 2016 as the official journal of the Center for the Study of Western Esotericism of the Southamerican Nations Union (CEEO-UNASUR  http://ceeo-unasur.blogspot.com.ar). This Center was created in august 2011 by its current director, Dr. Juan Pablo Bubello, as a result of his experience as professor and researcher in the Faculty of Philosophy and Lettres of the University of Buenos Aires. As well, we publish a biannual newsletter with news, interviews and information to specialists and general public. For more information, visit CEEO-UNASUR website or our facebook channel.